According to latest research, such parents are twenty times more likely to have their child removed from them and placed into care.

Parents who had first-hand experience of such trauma inflicted on their families spoke bravely to an audience of more than fifty guests as part of Aberlour’s No Place Like Home campaign.

Everyone needs a chance to shine

Mark, a father from Ayr, shared how he and his partner, who also has a learning disability, struggled with their first three children who were all adopted. With the right help and support, they were able to bring up their youngest two at home. He said “Everyone needs help and support. Everyone needs a chance to shine. I didn’t have a great upbringing myself and I had to learn how to be a good parent”.

Alice, a mother from Ayr told her emotional story of having her daughter taken into care. She went on to explain that with the right support, her daughter was reunited to her family .

Natasha, a mother with autism from Ayr described how Aberlour took some of the pressure of her and her family. “So many children get taken away from people with learning difficulties just because of their learning difficulties. If they’d just been given support to be parents. You don’t know how a parent is going to be until they are actually in the middle of it. We have to give people the chance to be parents.

Mark, Alice and Natasha all gave significant credit to Aberlour’s South Ayrshire Family Service, the only dedicated service for parents with learning disabilities in Scotland, for helping them to be reunited with their children and for giving them the skills and support to look after their children.

More must be done

SallyAnn Kelly, Chief Executive of Aberlour said: “We still have a journey to travel. The third sector and Aberlour continue to provide early intervention and prevention services for families but on a shoestring. These services provide substantial savings to local authorities but we still cannot shift their expenditure from intensive support upstream to instead supporting families earlier – we absolutely need to nail that as a nation. We believe it’s in the interests of children to remain with their families, and for the vast majority of families that is the case.

Supporting Aberlour’s No Place Like Home campaign are Parenting Across Scotland and the Scottish Commission for Learning Disabilities (SCLD). 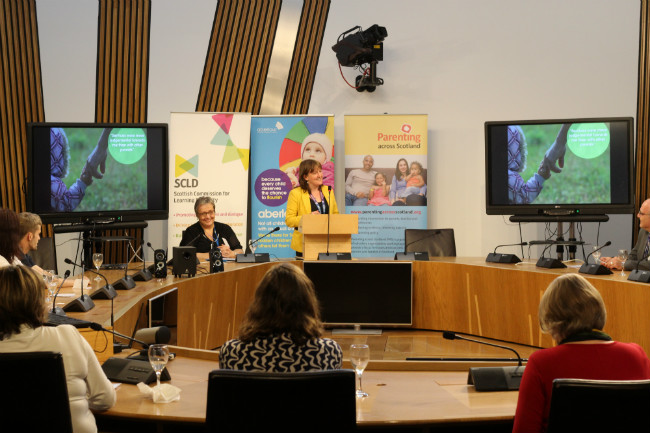 Maree Todd MSP spoke passionately about the willingness of Government to support all parents to however long it takes whilst acknowledging a need for societal cultural change when supporting parents with a learning disability. She said that consistent, individual support is key to making sure every child in Scotland have the best start in life.

She said: “I want to recognise the crucial role Aberlour provides in improving the lives of people with learning disabilities and how essential to the wellbeing of Scottish communities charities like Aberlour are.

“We already know that when parents and carers are supported to build healthy positive relationships, those children go onto develop positive relationships with their peers as they transition through nursery, school and into young adulthood. It is fundamental to having a successful healthy life.

> Support our No Place Like Home Campaign
> Donate now
> Volunteer