70 leaders and organisations from across Scottish society have joined together to call on the First Minister to speed up the introduction of a new income supplement to tackle child poverty.

The Scottish Government is set to update Parliament on its plans to introduce an income supplement to top up the earnings of parents on low incomes in a statement to MSPs on Wednesday.

The supplement is currently not due to be introduced until 2022, but campaigners say that is too far away for families living in poverty, and want to see legislation included in the next Programme for Government and an interim version to be delivered ahead of legislation being passed.[1]

Research from the Joseph Rowntree Foundation and the Institute for Public Policy Research Scotland has found that the equivalent of one classroom of children a day – a school a month – are being pulled into poverty in Scotland.[2] The Scottish Government’s own forecasts suggest that without action, the child poverty rate will rise to 35 per cent by 2020/21.[3] This will mean that ministers will fail to meet targets set in the Child Poverty Act unless more urgent and ambitious action is taken.

240,000 children live in poverty in Scotland and campaigners say that they should not be forced to wait until 2022 for the valuable lifeline that the income supplement can provide. 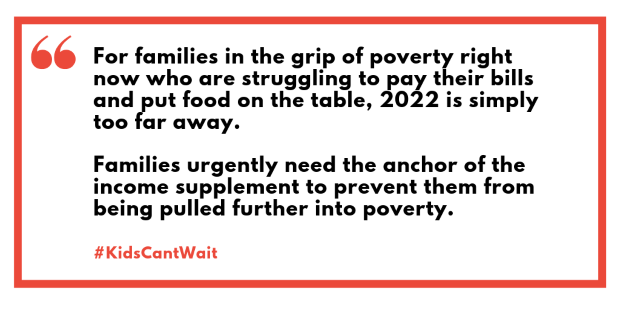 “The income supplement has been a welcome commitment from the Scottish Government, but waiting until 2022 is too late for many families who are struggling now and the 240,000 children living in poverty. Working with families across Scotland every day we see how many of them are at risk of falling deeper into financial hardship and being exposed to the worst effects of poverty and related toxic stress.

“The Scottish Government must use the powers available to them before it’s too late, to make a lasting difference to each and every one of those children and to prevent against adversity and resulting trauma.

“The biggest single thing that we can do to lift families out of poverty is to put money in the pockets of parents and ensure they can live a life where they are able to support themselves and their children to flourish.”

“In a caring society we need to ensure that everyone is protected. The way we look after our children is a key indicator of how well we are putting our values into practice. Delivering the income supplement before 2022 would go a long way to put our words into deeds and would make a significant difference for many families today.”

“Too many families are being swept up in the rising tide of poverty, struggling to pay bills and put food on the table. The new Income Supplement will be a lifeline for families desperate to stay afloat, but we need it now. Kids can’t wait.”

“The level of poverty many families are experiencing in Scotland in 2019 is an affront to our society’s shared instincts about fairness, justice and equality. It must not be tolerated.

“Harsh austerity policies pursued by UK governments over the last nine years have been the major driving force behind this. However, the Scottish Government has the power to act now and stop further increases in child poverty. It needs to be bolder and more ambitious if it is to meet its own targets laid out in the Child Poverty (Scotland) Act.

“Early implementation of the family income supplement would make a crucial difference to children and families across Scotland, and would demonstrate that what UN rapporteur on extreme poverty Philip Alston has described as the ‘principles of dignity and social security as a human right’ are alive in Scotland.”

FULL TEXT OF LETTER AND SIGNATORIES

Ahead of the Scottish Government’s statement on Wednesday on the Tackling Child Poverty Delivery Plan, we have come together to urge you to bring forward the introduction of the income supplement for low income families from the current delivery date of 2022.

All of our organisations strongly welcome the Scottish Government’s commitment to the income supplement, and we share your belief in the need to use Scotland’s social security powers to loosen the grip of poverty on people’s lives.

However, as you will know, child poverty projections for the coming years are stark. The Scottish Government’s own forecasts show that, without action, the child poverty rate is projected to rise to 35% by 2020/21. We will fail to meet the targets set by the Child Poverty Act unless more urgent and ambitious action is taken.

It is the firmly-held belief of our organisations that the urgent delivery of the income supplement must be one such action. The 240,000 children living in poverty in our communities across Scotland cannot wait until 2022 for the valuable lifeline that the income supplement can provide. For families in the grip of poverty right now who are struggling to pay their bills and put food on the table, 2022 is simply too far away. Families urgently need the anchor of the income supplement to prevent them from being pulled further into poverty.

This is particularly true for women, who are more likely to experience poverty than men. Women’s poverty is inextricably interlinked with child poverty, as women have a disproportionate responsibility for caring for children and account for 91% of lone parents.

We are therefore writing to you to urge that the statement this week commits to four key actions:

We recognise that the safe and secure delivery of devolved social security entitlements is a priority for the Scottish Government. But with the equivalent of one classroom of children a day – a school a month – being pulled into poverty in Scotland, we cannot afford to wait.

If we want to live in a Scotland where every child really does have every chance, we must act sooner than 2022. The statement on Wednesday offers the opportunity to make that happen, and we urge you to seize it.

Dr Hartwig Pautz, Lecturer in Social Sciences, University of the West of Scotland

Professor Chik Collins, University of the West of Scotland

Bishop William Nolan, Bishop of Galloway and President of Justice and Peace Scotland

Claire Telfer, Head of Scotland, Save the Children

Rt Rev Colin Sinclair, Moderator of the Church of Scotland

Rev May-Kane Logan, Chair of the Congregational Federation in Scotland