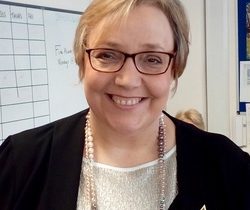 SallyAnn has over 30 years of experience working in Children’s Services, having qualified as a social worker in 1990. She was promoted to her first management post in 1996 and has worked in several Scottish local authorities in middle and senior management positions until 2008.

SallyAnn has a keen interest in strengthening and improving practice with an emphasis on taking rights based approaches. She has a particular interest in improving the experiences of children and young people who have experience of the wider care system in Scotland.  She has enabled Aberlour to put in place ambitious plans for improvement in how the organisation works alongside children and families – not being afraid to be led by the views of children and young people and their families.

She is a member of the Scottish Government Leadership Group on Child Protection and the Perinatal Programme Board.

SallyAnn has a commitment to challenging and reducing poverty and inequality and she has worked with colleagues within Aberlour and across Scotland over a number of years to ensure that reducing child poverty is at the heart of the political agenda.

SallyAnn has supported colleagues in Aberlour to focus on digital transformation and the organisation is currently involved in a number of initiatives to take change forward.

SallyAnn is currently the Chair of STAF (Scottish Throughcare and Aftercare Forum).