A decade of the Scottish Guardianship Service – Fartun’s story

Over the last ten years, nearly 700 asylum-seeking and trafficked children and young people have been supported by the Scottish Guardianship Service. Fartun was one of the first young people to come through their doors, read her story below.

“It was the 16th of September, 2010. I remember the exact time. Six o’clock. That’s when I first met my guardian, Jillian. I really liked her. We just clicked. As soon as we met, we had a connection.” 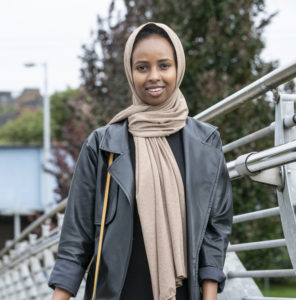 Ten years on, when her guardian teases her about her love for cappuccinos, 25- year old Fartun from Somalia admits she’s still not a morning person. But Jillian knew that seemingly endless meetings with lawyers and Home Office officials were mentally and emotionally challenging for the teenager seeking asylum, and a little caffeine boost would help. Every step of the way, Jillian was there for her.

“One time the interpreter, she was from a different part of Somalia, and Jillian realised I didn’t understand what she was saying. So, she stopped the interview and asked if we needed to get another interpreter.”

While Fartun’s life could be measured in legal appointments, the chance to meet other young asylum seekers at the Scottish Guardianship Service provided some much-needed fun.

“The dancing was my favourite bit cos we used to come every Tuesday to practice our Azonto dancing. We performed for Refugee Week. I was nervous. I was like, I’m just gonna fall, embarrass myself. But it turned out perfect. I still remember the moves.”

The year after she was granted Refugee Status, Fartun put on her snazziest outfit to join the guardians on stage at the Scottish Charity Awards, as the Scottish Refugee Council and Aberlour scooped the Partnership Award. Now as a Fashion Technology student, Fartun has her sights on designing outfits for special occasions.

“Hopefully one day I’ll open my own clothes shop. There aren’t many Muslim shops in Glasgow so I’d like to sell Islamic gowns.” Fartun loves Glasgow, its people and especially her guardians. “To be honest if it wasn’t for them, especially Jillian, I wouldn’t be who I am today.”