Julia and her family were supported by the Aberlour Family Support Centre in Falkirk after the passing of Zoe’s mum. The team helped the family through the Kinship care process to ensure Zoe could stay with her family. Find out more from Julia about her family’s journey and their dream for the future.

Three years ago, we received a call which changed my partner, Brian, and I lives forever. Brian’s sister had taken her own life. She had moved to England a year earlier with her daughter Zoe but due to family circumstances we hadn’t been in touch for a while. As soon as we received the call our first thoughts were ‘where is Zoe? We need to see her’, we are her family and she should be with us.

And so began our life changing journey.

Zoe was quite traumatised. Not only had she not had the best start in her life, but she had been in the house when her mum committed suicide. She saw her body on the bathroom floor. When her mum died, Zoe was placed into emergency foster care before being collected by her social worker and brought back to Scotland. Once social work was aware that Zoe had relatives who wished to care for her she was placed in a foster home near us. That was when the kinship process began, and I was introduced to Angela and the team at Aberlour.

Angela already knew Zoe. Aberlour had supported her, and her mum, when they lived locally. That was a comfort as we didn’t know Zoe, we didn’t have that close bond that you would expect to have with your niece due to our family fall out. However, Angela knew her really well and helped us to understand Zoe and why she would do things or ask for things to be a certain way. The service really helped with the transition so we could be the strong family we are today. Aberlour really was brilliant.

In the beginning when Zoe was staying with the foster carer I would go every morning to pick her up to take her to nursery. Then I would collect her at lunch time take her back to my house for her meals and bath. I would return her every evening just to sleep really. This was helpful as Brian and I don’t have kids of our own, we didn’t have that life experience also we didn’t have experience of Zoe from birth to 4 years old. It meant we had time to get to know each other. Within 2 months, Zoe was staying with us at the weekends. She would say “when am I moving in? I want to stay here forever”. Then 5 months later Zoe moved in. We were buzzing, we were delighted to finally have her living with us.

But it really wasn’t easy. We really needed help.

Zoe was traumatised, she had been raised around violence, drugs and alcohol. She used to worry all the time. Her mum had treated her as a friend not a daughter, so she had developed really mature behaviours for a 4 year old. She didn’t know how to act around other children as she hadn’t been socialised or went to nursery before she lived with us, she had only been around adults. She would try to go to play with other children outside or at nursey and then would think ‘I can’t do this’ and would come back to sitting with adults.

She was really difficult; she would lash out. She would pull my hair, in the first week of her staying full time I felt battered. She would trash her room and destroy all her belongings. I didn’t know a small child could cause so much chaos.

I also had my own depression to deal with. To spend the time I needed to with Zoe, I had to give up my job. I had been flung into looking after a 4-year-old who needed a lot of support due to everything she had experienced in her early life. Also, the stress of social work constantly watching. Having to attend meeting after meeting and constantly being terrified that if I did something wrong, they would take Zoe away from me. It was too much, I didn’t think I could cope. There was lots of tears and breakdowns. Brian and I have never really had time to grieve for his sister either. It was very hard to deal with a grieving child, to get on with your own life when you hadn’t grieved yourself and still dealing with what is going on around you.

We were in real danger of our family breaking down and Zoe being taking away from us. But I didn’t give up, I couldn’t have Zoe going anywhere else, she was mine and that’s it.

Angela and Aberlour supported us all the way. We wouldn’t have gotten that support anywhere else.

Angela taught me all about 5 to thrive, brain development and stimulation so I could understand how Zoe’s brain was wired so I could support her the way she needed me to. I still use these techniques 3 years down the line, they are so helpful.

I was able to understand how the trauma Zoe had experienced had impacted on her and her actions. Angela helped me understand that when Zoe was two she used to have issues with the toilet so I learned that Zoe saw the toilet as a sanctuary, a safe place. I then worked with her to teach her if she was scared, she didn’t have to hide there anymore. Food was also a problem; Zoe had been told from a young age she couldn’t get food ‘because she would get fat.’ We had to work with her to break these barriers down.

Due to the violence Zoe had experienced at home before she moved in, she constantly had to know who was in the house and why they were there. At first, I found this really stressful as I had grown up in a traditional house where kids went to their room to play with their toys when the adults were talking. But Zoe had to know because she was scared, she was worried about my safety. She felt it was her responsibility to keep me safe. Once I understood this, I could help Zoe. I had to understand she was grieving, she was frustrated, she didn’t have her mum. She was so confused, didn’t know what was going on and worried that we were going to give her up. That was a big worry for her, if mum was able to do that, we were able to do that too.

With Angela, my mum and I would do a lot of reflective sessions to look at different ways to handle situations. It was so helpful, especially having other members of our family involved so we can be the strong supportive family network Zoe needs.
Zoe has come on leaps and bounds; I have come on leaps and bounds. It was months of work, and if it wasn’t for Aberlour supporting us I don’t think I would be where I am today. I have learned that as a parent you are always learning! I am so proud of Zoe; she is so resilient. She has made the biggest changes I have ever seen anyone make in a life, especially with what she has been through. She has sky-rocketed at school and she is so proud of what she has achieved. My proudest moment was when we finally got residency, knowing she is mine and not going anywhere else in her life. Seeing how well she is striving every day. She is not that child anymore she is such a cheeky, cheerful, young lady.

To anyone reading this, please help Aberlour as they help people like me.

I have been a success because of the help they have given me. If I didn’t have support, then Zoe wouldn’t have had the support to be where she is today. I wouldn’t be where I am, and we could be looking at a completely different scenario for Zoe. I just can’t imagine that.

The next big thing for us is adoption. We are family and we don’t really need a bit of paper to confirm it. But I think it is important for Zoe, so she feels she belongs. She wants to change her surname as well, so we are working on that. Zoe is always so positive, and she always looks to the future, I think that is something we all need to do more of. 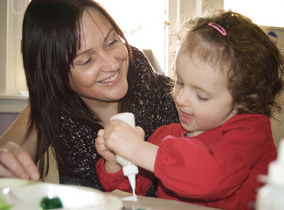